When Ulterra Drilling Technologies L.P. became the fastest-growing oil and gas drill bit manufacturer in the world and largest in the North American market, the organization’s explosive company growth spurred the need for stronger audit capabilities. Around the same time, the company had a change of ownership and began planning for the possibility of a future IPO.

“At Ulterra, our culture and strategy are focused on doing our work better and faster — engineering, manufacturing, customer service. Our accounting team and partners live up to that expectation too. Our growth has been explosive — the last thing we could afford to do is slow that down,” said Mimi Jeannotte, Director of Technical Accounting at Ulterra.

“The problem was that if we became a public company, we didn’t have all the right processes and controls in place,” said Hugo Restrepo, Controller at Ulterra. Ulterra made the decision to look for an internal audit outsource partner and an audit management software solution to help them set up an effective audit program and support continued company growth on the road to potential transactions or future mergers and acquisition activity. 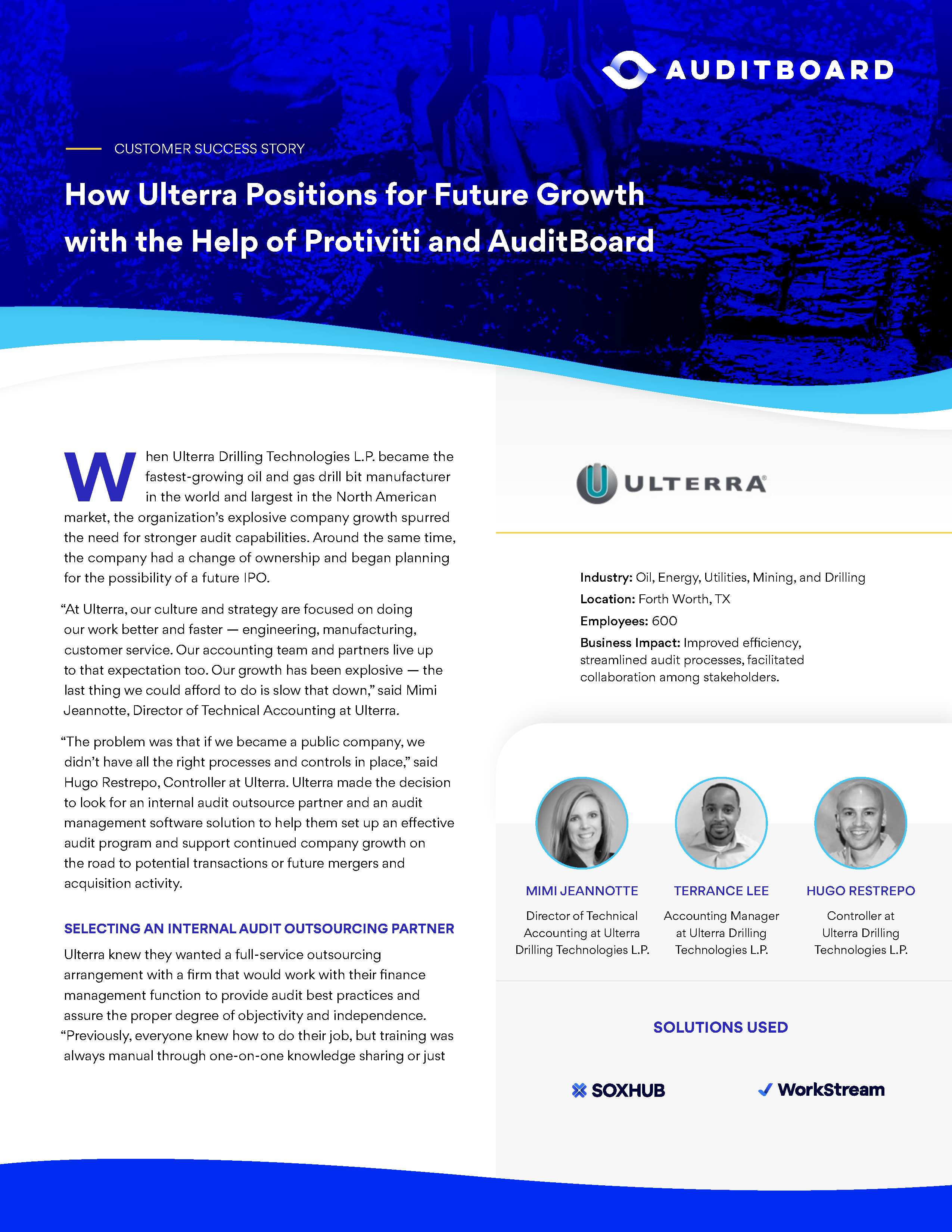 Ulterra knew they wanted a full-service outsourcing arrangement with a firm that would work with their finance management function to provide audit best practices and assure the proper degree of objectivity and independence. “Previously, everyone knew how to do their job, but training was always manual through one-on-one knowledge sharing or just picking up a document and trying to figure it out. Everyone knew what they were supposed to do, but there wasn’t a lot of documentation,” said Mimi Jeannotte, Director of Technical Accounting at Ulterra.

It was important to Ulterra that their internal audit partner would act as a trusted advisor, providing best-in-class assurance based on their deep internal controls expertise without completely reconfiguring Ulterra’s existing environment. “After looking at the different companies, we felt that Protiviti was in sync with our culture,” said Restrepo. “We had great meetings with Protiviti where they explained that they were not going to reinvent everything — they were going to take our work and make sure that it was sufficient. We felt it was a very efficient company that was willing to help us across the whole process.”

After comparing multiple firms, Ulterra made the decision to choose Protiviti as their internal audit outsource partner, believing they would provide the best expertise, value, and fit with their company culture.

Ulterra wanted Protiviti to leverage their best practices to build out the audit program, and they also wanted to own their audit management system in-house. They had been relying on Excel workbooks and annual narratives, and leaned on Protiviti’s expertise when selecting an audit management solution to streamline and automate their processes.

After a thorough due diligence process, Ulterra chose AuditBoard for its ease of use and flexibility. “We looked at different tools, but we were very impressed by AuditBoard’s capabilities. The platform was very user-friendly and able to adapt to our needs, so we ultimately made the decision to go with AuditBoard,” said Hugo Restrepo.

For Ulterra, the ability to get hands-on experience with the product during the decision-making process was critical. “We sent over our documents and within 48 hours they uploaded it into the platform and showed us how we could use AuditBoard to do our monthly close checklist — that flexibility was one of the deciding factors from our side,” said Terrence Lee, Accounting Manager at Ulterra.

AuditBoard also stood out because of its industry-leading implementation speed.“The implementation time was a quick turnaround of a few weeks, versus another product that was going to take much longer — around 90 days. AuditBoard’s fast implementation was a deciding factor for us,” said Restrepo.

Ulterra finds great value in Protiviti’s best practice knowledge and guidance. “The thing that I like best about Protiviti is when we’re doing something for the first time — or maybe we’re not doing it the best way — Protiviti is quick to say, ‘Here are some examples that we’ve seen elsewhere. Let us take a shot at it, get you a best practice, and pull from our repository of controls,’” said Jeannotte. “They are my number one stop when I don’t have something and I need it — whether it’s internal controls or processes or AuditBoard. They’re always there for us, and they have such a depth of knowledge.”

Protiviti’s industry expertise has helped Ulterra put in place important safeguards to strengthen assurance. “Prior to Protiviti, we didn’t do as much reviewing of our work. Protiviti pushed us to make sure that all reconciliations and issues are reviewed, which has improved our processes,” said Lee.

“Ulterra’s pace and whole-team engagement is refreshing. They learn quickly, communicate effectively, and hold us to high standards. They were doing a lot of things right, but always jumped at the chance to do them better when we challenged a current practice or offered a suggestion,” said Bobby Luka, Manager, Internal Audit & Financial Advisory at Protiviti.

Protiviti supports Ulterra’s future growth by setting them up for success with their plans to scale the audit team as the company continues to expand. “Even in the conversations about where Ulterra is going — there will be a day where we’ll co-source, and then there will be a day when internal audit is in-house because Ulterra expects to grow — we don’t see an end to this Protiviti relationship because we find so much value in the breadth of their experience,” said Jeannotte.

After a lightning-fast implementation further speeded by Protiviti’s expertise with the AuditBoard platform, Ulterra has experienced smooth coordination between Protiviti, control owners, and external auditors.

“In AuditBoard, the document request process is a lot more efficient from the internal audit side, and it facilitates requests from external audit,” said Jeannotte. “Internally, WorkStream dashboards help me monitor whether the team provided everything. The reporting functionality lets you see it in real-time, and sending comments in AuditBoard eliminates all of the email chaos. In the past you’d have to get an Excel document with the PBC list and then forward it from one person to another. We also like that external auditors can easily access and download the documents that they need.”

Centralized communication within the platform also enables control owners to work seamlessly with Protiviti and external auditors. “The entire team uses it, and I think it’s point-and-click easy. I’ve never heard a negative comment about AuditBoard. A lot of control owners don’t even need involvement from us or Protiviti because the notifications come directly to their email with a link to the PBC request, where they can easily attach their PBC items in the system,” said Jeannotte.

By leveraging AuditBoard products SOXHUB and WorkStream together, Ulterra has been able to boost the speed, accuracy, and visibility of their monthly close process. “As an accounting manager managing the close process, previously I had to keep an Excel file with all the different items that needed to be done before close. Now I can easily go into AuditBoard and see if items have been checked off… it brings a level of clarity to know that these things are done,” said Lee.

Ulterra has experienced significant time savings due to AuditBoard’s centralized documentation and workflow management. “If you think about every hour we save by having efficient and timely reviews, not repeatedly pulling documents, and not having any more lost documents — the human hours alone are a significant ROI with AuditBoard,” said Jeannotte. “Being a growing company, we’re a lean finance and accounting department, so every minute saved is a minute someone’s not working overtime or having to cut a lower priority task — it’s incredibly valuable.”

AuditBoard also reduces audit fatigue by streamlining and automating the audit process. “It’s more than the hours we’ve redeemed with AuditBoard, it’s the stress too. You’ve got a day job, and when the auditors come in to request things — whether it be our external auditors or Protiviti as our internal auditor — with AuditBoard, our request list is stored, and the human satisfaction of touching something once versus three times is huge,” said Jeannotte.

Protiviti and AuditBoard Pump Up the Value

Protiviti’s industry expertise and familiarity with the AuditBoard platform has helped Ulterra get the most value from the system. “From the beginning when we first started using AuditBoard, Protiviti had that deep knowledge of the system. They even hosted a group session for Ulterra that demonstrated how control owners and external auditors could best utilize AuditBoard’s platform and functionality,” said Lee.

By leveraging Protiviti and AuditBoard together, Ulterra has streamlined audit activities while gaining comfort over their audit program and other processes. “We find a tremendous amount of value in both relationships — we see them in so many ways as synonymous. Protiviti does all their work in AuditBoard, and AuditBoard facilitates Protiviti’s work. We now have the value to deploy this to other processes like the 401K — we know we’re headed in the right direction,” said Jeannotte.

An additional benefit from the partnership between AuditBoard and Protiviti is an increased confidence over IPO readiness. “Having the people from Protiviti, with the knowledge that they have, combined with the technology that we get from AuditBoard, it’s a no brainer,” said Restrepo. “We will be ready for future mergers and acquisitions — we’re in good shape now because of the help that we received from both companies.”

Learn more about how Protiviti and AuditBoard can help your organization leverage internal audit technology and services as a strategic combined resource to effectively manage risk and drive better decision making.