Find out how TriNet’s internal audit team leveraged technology to save time and boost efficiency while achieving widespread stakeholder adoption — and download the PDF Success Story below!

As cloud storage services have become standard resources in the enterprise, internal audit has increasingly incorporated tools to improve organization and facilitate collaboration. Yet, when it comes to enterprise technology, the overall benefits can sometimes be difficult to measure. Some audit tools can be over-engineered, difficult to implement, and unintuitive — ultimately contributing to problems instead of solving them.

Such was the experience for Danielle Ritter, Executive Director of Internal Audit at TriNet, and Lisa Hughes, Internal Audit Manager at TriNet. Their internal audit team had implemented a popular industry tool to help them manage the company’s Sarbanes-Oxley program in 2016. However, they quickly discovered the technology did not meet the needs of their rapidly growing environment, and decided to search for a new application to improve efficiencies and transparency in their process. 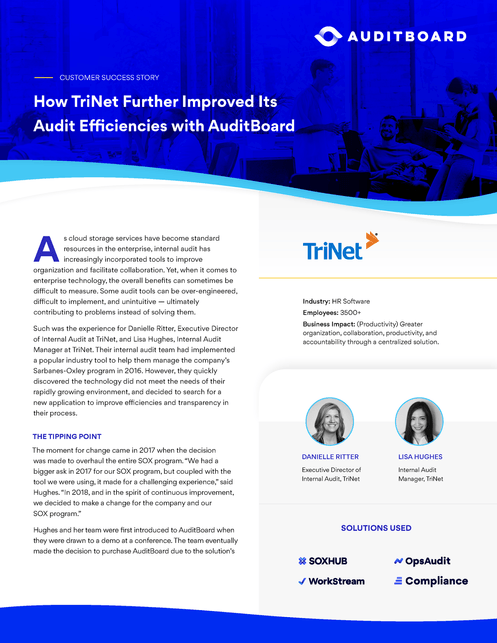 The moment for change came in 2017 when the decision was made to overhaul the entire SOX program. “We had a bigger ask in 2017 for our SOX program, but coupled with the tool we were using, it made for a challenging experience,” said Hughes. “In 2018, and in the spirit of continuous improvement, we decided to make a change for the company and our SOX program.”

Hughes and her team were first introduced to AuditBoard when they were drawn to a demo at a conference. The team eventually made the decision to purchase AuditBoard due to the solution’s speed and simplicity, and the audit expertise and professionalism of the AuditBoard team. “The other tools we demoed did not meet the expectations quite like AuditBoard. Additionally, AuditBoard was a better listener to our user concerns during the demo process and this stood out compared to the competition. Trust was a large factor, and I felt like AuditBoard had worked the hardest to establish themselves as a reliable business partner.”

When TriNet’s SOX data was uploaded into SOXHUB, AuditBoard’s SOX solution, it helped the team immediately simplify their document management efforts. Now, with AuditBoard’s centralized database — organized by a single page control layout — TriNet keeps their SOX documentation accurate, consistent, and accessible in just a few clicks. “We are much more empowered to get testing and documentation done quickly because we can upload information to the tool so much faster than before,” said Hughes.

“When we implemented AuditBoard, it was like being propelled forward into the 21st century” — Lisa Hughes, Internal Audit Manager at TriNet.

Having a centralized place to manage issues ensures that issues are tracked and remediation requirements are clear. Other parts of the business have also become more responsive by leveraging AuditBoard’s functionality to track risk across the company. “It’s a one stop shop for items that need to be further improved. From a broader risk management perspective, we’ve even begun conversations with our Security Office around using the AuditBoard functionality to track other control improvements that we want to monitor through to resolution, even if they may not have arisen from something that we did in SOX or in an operational audit. They’re interested in the functionality to be able to track remediation items in one place,” said Ritter.

The automated notifications and increased visibility into real-time status has proven helpful in further promoting an accountability culture at TriNet. “And of course, the internal audit group need to be accountable to our business goals,” said Hughes. “My team and I are committed to  actively following up on our recommendations and findings. If there’s something that has to be done, it won’t get lost in a spreadsheet or an email. Even more, records of the information are kept, which also helps with historical knowledge.

AuditBoard’s flexibility to easily add and configure new fields helped TriNet streamline document request management between process owners, internal audit, and external audit. “One idea that was an easy quick win to build a better rapport with our external audit team was to create another field in the control section of AuditBoard to track management’s year-end PBC completion date,” said Ritter. “The PBC delivery date was uploaded in the platform. Now when our external auditors go run a control matrix, they can have that field reported in the control matrix without needing to reconcile against some external spreadsheet that may constantly be changing.”

AuditBoard’s intuitive interface promotes high adoption among TriNet’s team and other business users. “The staff level users are more active in using it, and that takes a lot of work off me. It helps with transparency,” said Hughes.

It’s a very user-friendly, efficient platform that has solved a problem that’s existed for 20 years since SOX has been out — to develop an intuitive solution that is designed for auditors …  it helps us perform our job without having to conform our procedures to some tool.” — Danielle Ritter,  Executive Director of Internal Audit at TriNet

“They feel more empowered — and they’re less resistant to requests,” said Hughes. “People generally don’t love SOX, but the fact that they went from using a manual tool and all these other apps and email to something centralized — the business users are much happier about that,” said Hughes. “Every once in a while I get an ‘Oh this is neat!’ or ‘Oh I can do this?’ It’s a great feeling knowing we have implemented a solution that continues to receive such positive feedback.”

AuditBoard has also helped TriNet to more efficiently collect information from their business partners in an efficient and user-friendly way. “It’s easily adoptable from an audit perspective, but also for the end users,” said Ritter, who used the WorkStream functionality to roll out an ERM questionnaire. “I sent the questionnaire to over 25 senior executives and direct reports. No one had issues with me granting them access, clicking the link, and knowing how to complete the survey. I think that shows the user friendliness of the tool — you can give any SVP an email that says, ‘Go complete this survey,’ and they were able to do it seamlessly.”

“We are very happy to have Auditboard as it is the right solution for our team and the broader organization,” said Hughes.

Also, TriNet found that the AuditBoard Support team has gone above and beyond not only when helping the internal audit team, but also members outside the department. “I really appreciate when they keep me in the loop on questions that have come from our control owners,” says Hughes. “It’s just nice to see that they are already working behind the scenes to keep the control owners happy. They even remember the little nuances about TriNet, like reminders about needing SSO access. It’s just these little touches — they don’t have to say that, but they do, and I think, ‘Thank you. You already saved me an hour of my day.’”

Prior to 2018, TriNet’s internal audit group focused entirely on SOX, but in 2019 the team redeployed time saved on SOX to operational audits that deliver value to the business. “We believe large scale operational audits will be a benefit to the company,” said Hughes.

Due to internal audit’s success using AuditBoard for their SOX program, the team also adopted OpsAudit, AuditBoard’s internal audit management module, hoping to experience similar results with their business process audits. “The transition into OpsAudit was pretty seamless,” said Ritter. “Whether it’s us using SOXHUB to test SOX controls or OpsAudit for us to design, develop, and then create test plans — it’s all very intuitive because it’s the same interface and functionality, which made it efficient to adopt.”

Hughes found that having TriNet’s SOX and internal audit programs together in AuditBoard has contributed to even greater accountability. “It is more efficient to have one central source of truth organizing our information,” said Hughes. “Having a centralized tracking system with everybody linked to accounts in AuditBoard has driven a lot more accountability, alignment, and efficiencies with the entire business.”

“I spent 16 years in public accounting … AuditBoard is the best platform that I’ve seen out of all the tools my past clients use. I’ve had handfuls of conversations about AuditBoard with people in my network, and I always tell them that it’s super intuitive. It’s user friendly. It does its purpose efficiently. I totally recommend it.” — Danielle Ritter  Executive Director of Internal Audit at TriNet

Leveraging AuditBoard, TriNet’s audit team is now positioned to gain greater efficiencies year over year as they continue to manage their SOX controls and internal audits using the platform. Learn how you can join hundreds of AuditBoard customers like TriNet in saving time and increasing efficiency for your internal audit function.